Joined Nov 27, 2020
·
18 Posts
I believe my chicken has a prolapse, she is still active, eating and pooping, but her butt is a mess and I can see the tissue. What can I do to help her? I have isolated her in a cage away from the other girls, and I have been treating her with Preparation H. Is there a chance this will go back in on its own or do I need to get her to a vet?

Joined Sep 8, 2013
·
24,628 Posts
If she is prolapsed it could go back in by itself. Are you pushing the tissue back in when treating with the Prep H?

If the others are not bothering her, I'd leave her out there with them. Otherwise you're going to have to get them to accept her back in the flock again.
B

Joined Nov 27, 2020
·
18 Posts
No I'm afraid to push it back in. Should I try it? I was just putting the Prep H on it. I'm so afraid of hurting her. They other two birds never really got along with her, but they didn't hurt her either, just kind of ignored her. So I guess I will put her back in the coop tonight if you think that is best. I read an article that said to only feed her corn and keep her isolated in the dark for two days, so thats what I was going on. I should have asked her first.

Joined 6 mo ago
·
140 Posts
Here is an article from a blog that provides pictures of what to do with a prolapsed vent. 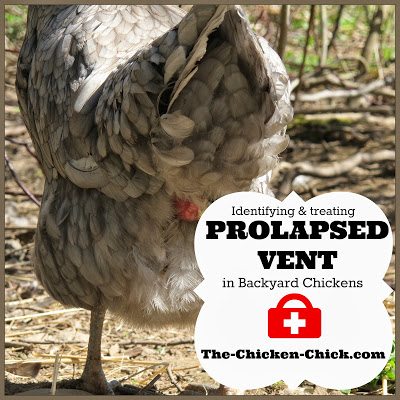 The Noon discount code is the perfect way to save on a wide range of products in the large online marketplace discountcodes.gulfnews.com/noon. With a huge selection of products available, shoppers in the UAE region can enjoy great discounts on their purchases. Prolapse vent in chickens, also kno ...

This particular author did separate her hen from the flock. When I have a sick chicken that needs separation, I try to do it in my "grower coop" that is near the main coop so the others can still see/hear their injured flock mate, but they can't pick at wounds. If you're able to do something like that, it's probably best. You won't have to re-introduce, but also don't have to worry about the others making it worse.

The reason they say to put the chicken in the dark is to discourage egg laying, which stresses the oviduct. You do want to give it time to rest, or the prolapse might reoccur.

And what Lillith said about the dark. If it stays dark though she won't eat or drink.

Joined 6 mo ago
·
140 Posts
You can put a light on timer so they don't get enough light to stimulate that "make an egg" function but have enough light to eat and drink. I believe the article says less than 12 hours, but if you have a breed of chicken that's known for laying through the winter months or something, I would go even less than that to turn it "off". If you're home most of the day, you could even put her outside with the flock and then return her to a dark area after a certain number of hours, provided the flock isn't picking on her.

I think the corn is supposed to discourage the egg laying function, too, but you would be depriving her of essential nutrients that are also necessary for the healing of a prolapsed vent. For example, calcium helps the muscles of the uterus muscle to contract as it needs to. I think reducing the amount of light she is exposed to will at least slow down the egg making process sufficiently without changing her diet.